Over our almost 125 year history Rotary Watches have been there through some of the most monumental moments in history. In partnership with the Royal British Legion and the ‘Remember Together’ campaign, we’re looking back to Rotary’s efforts during the Second World War as an official watch supplier to the British Army.

*An advert from 1939, the start of the Second World War. Reproduced with the kind permission of the British Horological Institute.

Although one of the rarer examples of British Army watch suppliers, Rotary has been referenced in several lists of official watch manufacturers employed during the Second World War. A few of the original watches have also surfaced with the ATP mark on the case back. ATP is widely considered to stand for either Army Trade Piece or Army Trade Pattern, and denotes a watch used by the British Army. The majority of Rotary watches with an ATP also have a serial number of either Mxxxx or 6xxxx .

All ATP watches were created with similar specifications to make them standard issue. However, there were slight differences between the manufacturers. For instance, the Rotary ATP watch was actually one of the largest cases at 33.5mm and featured horizontal luminous markers at 3 and 6 O’clock, whilst the 9 O’clock mark has above it a dot with the horizontal line. 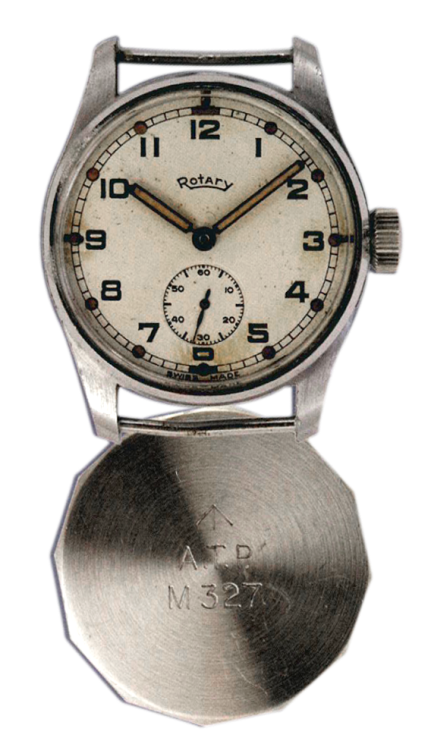 *An example of an original Rotary ATP watch.

Unfortunately, after WWII the watches were meant to be destroyed or decommissioned along with a lot of official documentation, meaning it is very difficult nowadays to come across one of these amazing pieces of history and poignant reminders of the way in which many countries, companies and people came together in the name of securing and protecting our freedoms.